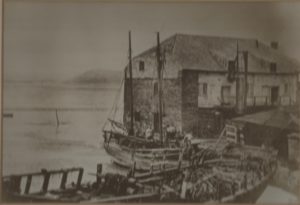 The founding father of the Club was Rear Admiral H H Rogers who served as the first Commodore from 1938 to 1953. His Cornish wife “Aggie” was a formidable sportswoman, representing Cornwall in golf, tennis and shooting, who also won many races in Falmouth in her 18 foot fixed keel gaff topsail cutter! Their son, Cecil, was a top class racing helmsman and the three of them virtually ran the Club in the early years as Commodore, Treasurer and Secretary respectively.

Another contributor in these early years was Major Pyne, known as “Maister”, who owned Gentle Jane, the house and beach on the estuary, from 1935 and lived there from 1940. He suggested the Club might like to use the beach for starting and finishing races and so Gentle Jane became the home of the Club for the first 14 years of its existence.

In 1936 the Rogers family called a meeting at the Roskarnon Hotel to discuss the formation of a new Club. Racing started in 1938.

At this time, and with great forethought, the founders organised the design and production of a new class of racing dinghy suited to the Camel Estuary. It had to fulfil three conditions:

The result was the Rock One Design, often referred to as the Rock OD. It was designed by Peter Brett, built by Hunkin’s of Fowey and with sails by Ratsey. The price of an OD was twenty-two pounds and ten shillings, without oars!

The skippers in the fleet of about ten racing ODs included Cecil Rogers, Brian Watson, Bill Passmore (whose father owned the Rock Pub) and Martin Morris, who many current members will remember, along with his fellow ERA racing car owner, Prince Chula of Siam. The Prince was said to be faster in cars than boats!

After the Second World War the membership stood at only 64 but there soon followed an influx of new members and boats. A starter’s hut was erected at Gentle Jane in 1947 and served for many years.

In 1950 there was a heated dispute between the Club and the owner of Cant Farm over the use of the private road as access to Gentle Jane for the racing dinghies. The argument was eventually resolved, allowing limited access, and at the same time more owners were keeping their boats in Rock and sailing up to the start off Gentle Jane. In 1951 the Club obtained the use of a hut at Ferry Point for members to store their gear.

Sadly Admiral Rogers’ wife, Aggie, died of cancer in 1953 and the Admiral subsequently resigned as Commodore, sold Roskarnon and moved back to the Helford River where he died two years later. The Rogers family set the tradition of good seamanship, keen racing and a happy family atmosphere which remain the hallmark of the Club today.

The Club continues to operate under restricted conditions in line with current regulations and guidelines. Friday fish night is still on for takeaway 1800 – 20000 hrs. Call the club or email clubmanager@rswsc.co.uk to book. Similarly drinks, light lunches and snacks will be available by table service on the quay. Keep an eye on the website for details of bar and galley opening times.

The website blog which sends out the regular stuff is open to all who choose to subscribe to it, members or not. In the present uncertain times the Club needs to be able to contact just the members for things like AGM notices etc. so all members email addresses have been added to a separate mailing list.