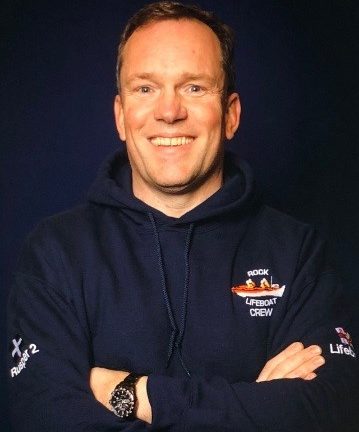 As we approach the second May Bank Holiday weekend, I am pleased to report continued positivity in our Club.

So far this year, we have seen a very good uptake in Members renewing their Membership as well as several new Members joining our Club. The introduction of the Membership Card system going ‘live’ was a little slower than I had hoped, and in my role volunteering occasionally behind the bar, I have been able to experience first-hand the simple process required to activate, personalise and issue cards to Members who are shown to have paid their Membership on the database.
On the whole, the vast majority of Members have accepted the scheme well, understand how it works, and see the benefits of it. There have been a very small handful however, who have been ‘caught out’ by the fact they had chosen to buy ‘incorrect’ membership (one adult, not spouse a Member etc…when clearly the both use the facilities…) Some have subsequently realised the error of their ways and have since paid up and taken correct Membership. Disappointingly, just one or two were quite unpleasant towards staff in the change-over period claiming they knew nothing about this, and so clearly do not read my Newsletters. I will not accept confrontational behaviour towards staff at our Club, and take this opportunity to mention that our new CCTV system is in use at all times throughout the building. Thank you to all who have embraced the change so positively.
We are in the process of experimenting with a brand new Club Membership computer software package, which will be the next step in making life easier for our Members and staff. Richard West has already stated that much of his summer will be spent perfecting the system, which we hope will be ready in time for the Membership Renewals ‘roll out’ at Christmas. Rather than posting out vast quantities of paper to every Member (which takes a room full of volunteers and costs a fortune), we hope that we will be able to send out Membership Renewals via email. Once you have clicked the right boxes and filled out the usual information you currently do for us in ink, the system will total up what you owe, and you will be able to pay electronically! This will save hours and hours of administration time, for both staff and volunteers who have to make sense of what is received back. I am sure I will be able to give further information to you closer to the time. 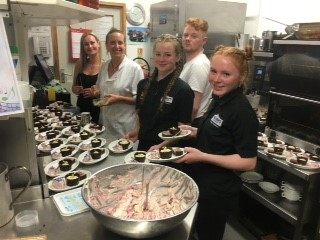 I am pleased that following the departure of Chris, the Club has appointed Denise, our Chef. Denise has settled in very well, and is keen to improve things as far as the Galley operation is concerned. She has some great ideas about menus, and catered recently for the Choral Society dinner, which was very well received, and the meals looked delicious! I attended a catering exhibition with Denise and Smudge at the Royal Cornwall Showground, which was a great opportunity to introduce Denise to suppliers, ask questions etc. Denise knew many of them having worked in the catering industry locally for some time, and has changed some of the suppliers to firms she knows who have been more competitive. Denise makes use of fresh local produce wherever she can. I am sure you will introduce yourself when next in the Club, and support Denise and the Galley.
As a result of Chris moving out, and Denise being offered the flat upstairs, the flat was completely refurbished. My sincere thanks to Richard and Gill, Keith and Gina and Smudge who cleaned, scrubbed, painted, repaired every aspect of the flat and then arranged re-carpeting, vinyl flooring and blinds. The end result looked amazing, and surely has the most enviable and uninterrupted view in Rock!
The cabins have been improved ready for the season with the replacement of the very old mattresses on the bunks with new ones, complete with mattress protectors. The staff who returned at Easter and used the cabins and slept in the beds were delighted. Thanks to Dave Parr for carting away old mattresses and furniture from upstairs. Further improvements are planned upstairs, including the rearrangement and refurbishment of the two bathrooms upstairs to include showers. This will take place after the season as part of the ground floor alterations and improvements which had to be put on hold due to time constraints with tradesmen. Despite having the grant funding to carry out the works, we could not risk starting and not finishing before the season. 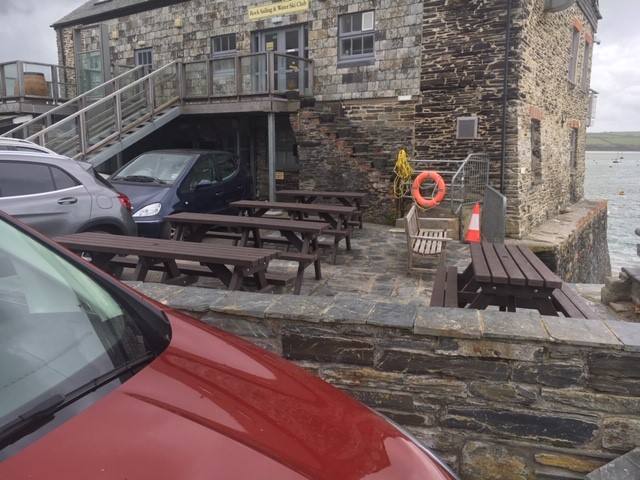 The House Committee, led by Gill, have completed a major clear up of the quay, supported by a team of volunteers, especially driven by Nick and Jo Turner who are keen to see the quayside look more welcoming. One row of redundant dinghy racks were removed and scrapped, as well as the old picnic benches which virtually fell apart. New, replacement picnic benches have been installed which are superb, and are made entirely of recycled plastic. I am sure they will provide many years’ service and still look good, despite the arduous conditions our quay faces. 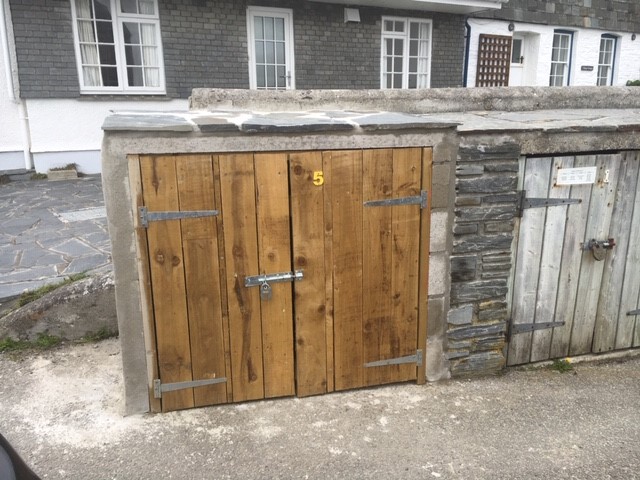 One new outboard locker was constructed alongside the others, which will provide much needed extra bookable space. Superb new stainless steel railings on the top of the quay wall have just been fitted by Pete Lethbridge, who is well known locally for his marine stainless steel fabrication work. Apart from a positive safety feature, I am sure you will agree that they look fantastic. We are due very shortly to completely re-surface the slipway with Tarmacadam from the road to the start of the concrete part of the slipway. The entire slipway is included in our lease with the Duchy, but we hope that major users will be kind and contribute towards our costs of this major task, as some of the local commercial users have already done.
The Clubhouse was incredibly busy over Easter, with the Easter weekend being a record breaker in terms of bar takings. I enjoyed volunteering on the bar and I’m sure Tina felt the same about clearing plates and glasses on Good Friday (?!), when the Clubhouse had a great atmosphere, despite being five deep at the bar on occasions! 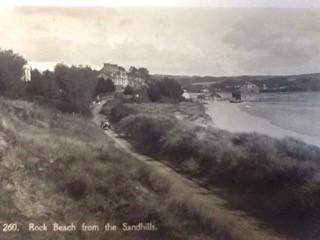 It is always sad to report when long standing Members of the Club pass on, and the Club was very sorry to learn of the passing of Peter Fuller who had not only been a Member for many years, but had worked tirelessly on the Management Committee of the Club, and served as President for ten years. Unfortunately, I was on the Isles of Scilly when Peter’s funeral took place, but I am pleased that the Club was well represented. We also learnt of the passing of Jean Kelly, who, together with her late husband Red Kelly, were long standing Members. I was pleased to be able to represent the Club with others at her funeral, and I think those gathered were delighted that their famous white Peugeot car – H10 RED, was part of the cortège! The families and friends of both Peter and Jean both chose to come back to the Club for refreshments after their respective funerals, which seemed absolutely appropriate, given that each of them were so much a part of the RSWSC ‘family’. 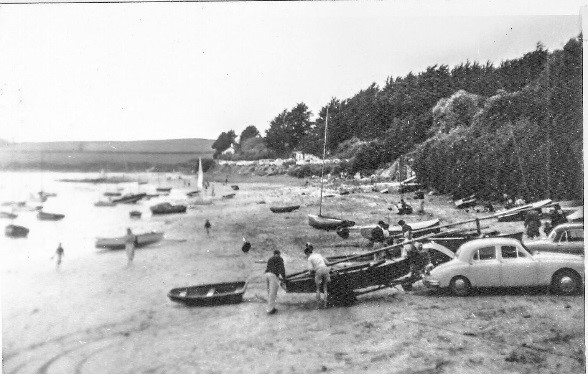 Sailing took place over Easter holidays, although numbers were a little disappointing. Much activity took place over this past weekend with rigging and launching of several of our Shrimper feet, with Shrimper owners happily helping each-other, so in effect each launching several boats!
Shrimper racing started last Sunday 12th May. Rod Offer and Ian Chisholm have especially volunteered as Race Officers so if your Shrimper is on the water, I hope you did your best to turn up and race. The Club is experimenting with some mid-week
Shrimper racing this year- the first of these last week on Tuesday at 1400 and then Thursday at 1600. This is an opportunity for novices or cruisers to try out racing alongside others. 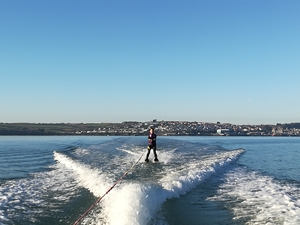 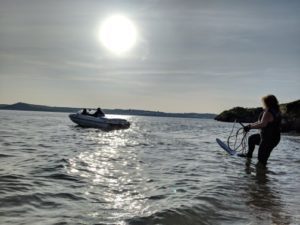 The waterskiers have been enjoying themselves and particularly when we have enjoyed some lovely conditions. Their season started well, with most ski boats displaying the correct ski number. Collecting ski numbers from the bar seems to work very well. If you haven’t already done so, please collect yours.
Sadly, it has been reported that there have been reports of just a very few not following the rules and operating dangerously in the ski area. Please be aware that anyone, whether or not a Member of our Club, will be reported to PHC if found to be endangering themselves or other users of the ski area. The skiers look forward to soon benefitting from the latest purchase the Club is making. Having removed (and sold) the floating raft, it being replaced with a very much more solid, bespoke made raft – which is under construction at Rock Marine Services and soon to be installed. It should last for many years ahead.
The moorings are filling up nicely from now on, and skiers are busily preparing boats too, for what we hope will be a great summer in Rock. I look forward to seeing you soon at our Club!
With all good wishes,
Stuart Robertson – Commodore RSWSC.

The Club continues to operate under restricted conditions in line with current regulations and guidelines. Friday fish nigh is still on but with limited numbers over 2 sittings. Call the club to book. Similarly Sunday Carvery is still keeping hunger at bay but again with limitations on numbers, and safety guidance in place. Again please ring to book.

The website blog which sends out the regular stuff is open to all, members or not. In the present uncertain times the Club needs to be able to contact just the members for things like AGM notices etc. so all members email addresses have been added to a separate mailing list, however anti spam rules mean all have to be asked to confirm it’s ok to send you email on this list.